An atmosphere of trust, collaboration and unity settled over those gathered at this year’s annual iftar held by the Ports Development Company, the owner and developer of King Abdullah Port, with the participation of a wide array of guests including managers and stakeholders from the Economic Cities Authority, the Saudi Customs, the Border Guard, the Saudi Food and Drug Authority, the Saudi Standards, Metrology and Quality Organization, and the National Container Terminal Company, which is the main operator of container berths, in addition to representatives of a number of international shipping lines and logistics companies.

Eng. Abdullah Hameedadin, Managing Director of the Ports Development Company, addressed the gathering, wishing all present a spiritually fulfilling holy month of Ramadan while praying to Allah to bless the Kingdom and all Arab and Muslim nations.

“It is an honor and, indeed, it is spiritually fulfilling to be able to meet with all of you in this setting to celebrate the holy month of Ramadan,” said Eng. Hameedadin. “King Abdullah Port is, by its very nature, is a sprawling, multi-faceted project that demands the services of numerous diverse companies and agencies. Tonight’s iftar offers us the opportunity to embrace this vast diversity as well as our common goals.”

In his remarks, Eng. Hameedadin praised and congratulated everyone present for their determination to work without restraint to make King Abdullah Port one of the most exciting additions to the global shipping industry. Eng. Hameedadin proclaimed that everyone should be rightfully proud of the year’s accomplishments, which included an 8% growth in throughput in 2016 and an infrastructure to increase container capacity to more than four million TEU, in addition to the first operational phase of RORO and bulk terminals that are being developed at a steady pace.

Eng. Hameedadin also spoke of King Abdullah Port successfully aligning itself with Vision 2030, as it is the Kingdom’s first privately owned, developed and operated megaproject and is devoted to attracting additional businesses that will contribute to the much-needed diversification of the Saudi economy. He also celebrated the participation of Saudi women in the King Abdullah Port’s growth, pointing out that dozens of Saudi women employed at the port are indispensable to its operations.

Run by the Ports Development Company, King Abdullah Port is the first port to be fully owned, developed and operated by the private sector in the Middle East. With its strategic location and state-of-the-art technologies, all managed by national and global experts who strive to offer the best possible services, King Abdullah Port has earned its place at the heart of the world’s major shipping lines, all within a solid plan that will bring its vision of becoming one of the world’s largest ports to reality. 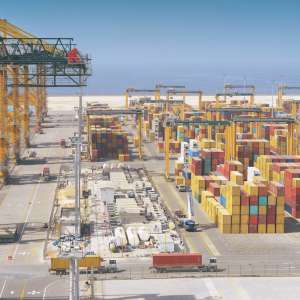 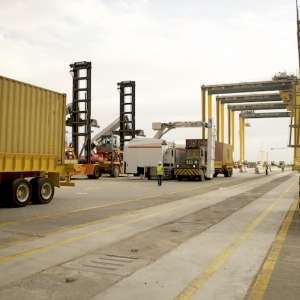