King Abdullah Economic City, October 2018: King Abdullah Port has announced its participation as a sponsor and speaker at the UAE Maritime Week, the Middle East’s first comprehensive maritime event. The port’s participation comes in an effort to capitalize on the major opportunities offered by this strategic platform for maritime transport pioneers from around the world. UAE Maritime Week is organized by the Dubai Maritime Cluster Office.

King Abdullah Port CEO, Rayan Qutub, is participating in the Dubai Maritime Summit on October 28 as a speaker in a session discussing the Chinese Belt and Road Initiative (BRI), which is expected to be a game changer for global transport. Qutub’s participation stems from King Abdullah Port’s important role as a major regional player that might significantly contribute to the expansion of BRI to include the Red Sea region, as well as actively contributing to the realization the logistical goals of Vision 2030 under the leadership and supervision of HRH Prince Mohammad bin Salman. BRI expansion will have a positive effect not just on the Kingdom, but also on all the GCC countries as well as East African countries.

The session will also discuss the massive investment in infrastructure and its potential implications for the bulk and liner shipping sectors, pattern of trade, and ports and maritime infrastructure in the Middle East, in addition to how the region’s ports could be linked to the Chinese initiative.

The port will also participate in Seatrade Maritime Middle East, which is also part of the UAE Maritime Week and is set to take place October 29-31. The exhibition will bring together decision makers and players from the maritime shipping sector and the maritime industry to communicate, finalize deals, enhance and develop cooperation opportunities and partnerships, and discuss and study maritime industry related issues in extensive specialized sessions.

King Abdullah Port recently announced a record 50.5% increase in container handling in the first half of 2018.

Run by the Ports Development Company, King Abdullah Port is the region’s first port to be fully owned, developed and operated by the private sector. It has been listed as the fastest growing container port in the world and one of the world’s top 100 ports after less than four years of operation. Eight of the largest shipping lines work at the port, which offers integrated services to exporters and importers. The port’s development plan is proceeding at a steady pace with a clear vision to become one of the world’s leading ports, benefitting from its advanced facilities and proximity to the bonded and re-export zone and the logistics park, to offer clients logistical support that enables them to achieve sustainable growth.

King Abdullah Port occupies a total area of 17 square kilometers and enjoys close proximity to King Abdullah Economic City’s Industrial Valley and the bonded zone. The port is making an increasingly important contribution to the Kingdom’s regional and global role in trade, logistics and shipping. Once fully built, King Abdullah Port will be able to handle 20 million TEU, 1.5 million CEU and 15 million t of clean bulk cargo every year. 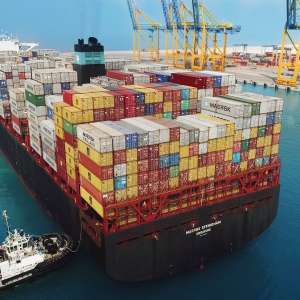