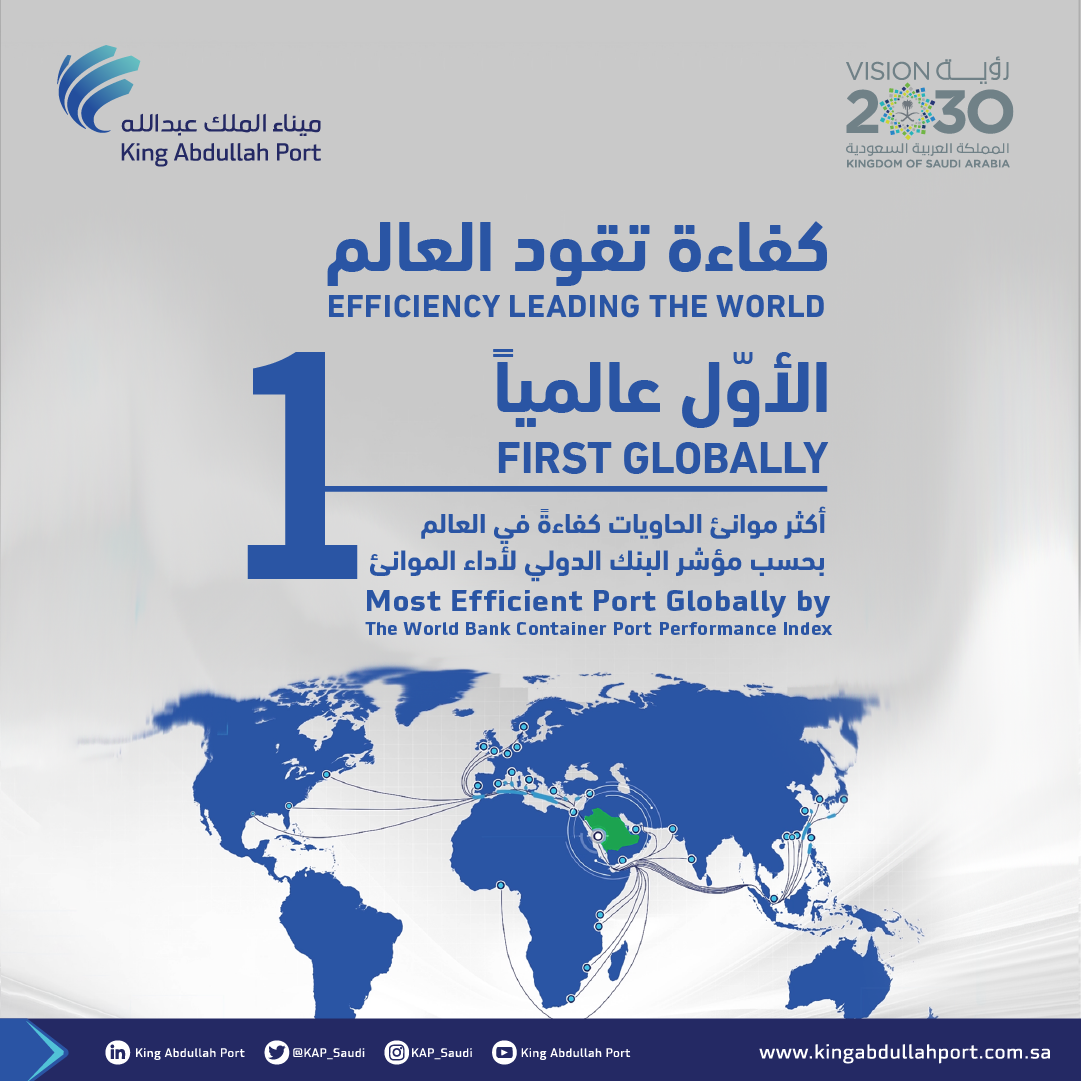 King Abdullah Economic City, May 2022: In a shining achievement on a global level, King Abdullah Port has been ranked first among the most efficient container ports in the world on the 2021 Container Port Performance Index (CPPI) report published by The World Bank and S&P Global Market Intelligence. The port improved its ranking from second place last year after achieving the highest points among 443 ports on both the administrative and statistical methodological approaches of the index, which scores ports against different metrics.

Asian and Middle Eastern ports dominated the ranking for the most efficient gateways in the world. King Abdullah Port is followed by counterparts in Oman (Port of Salalah) and Qatar (Hamad Port) respectively. The report noted major improvement in the positions of the top 10 ranked ports, since CPPI 2020. Hamad Port and Jeddah Islamic Port moved up 34 and 35 positions in the ranking respectively, while the Yokohama Port (Japan) fell from its first place in both approaches in 2020 to 10th and 12th and the Port of Guangzhou (China) dropped from 6th to 9th place in CPPI 2021.

Commenting on the new milestone, Jay New, Chief Executive Officer of King Abdullah Port, said: “We are proud to announce that King Abdullah Port has been awarded the first position in the CPPI global ranking for container ports. This prestigious accolade represents a major leap forward and was made possible thanks to our commitment to consistent growth and our unique ability to mitigate challenges caused by disruptions in the global supply chain, as well as the success of strategic decisions taken in the face of profound uncertainties. This recognition will serve as a motivation to continue to maintain our position as the industry leader and increase our contribution to transforming the Kingdom into a global hub connecting Asia, Europe, and Africa and increasing its non-oil exports, as per the directives of the Vision 2030.”

King Abdullah Port’s ranking in CPPI 2021 recognizes its efforts to achieve increased operational efficiency, quality controls and infrastructure development and management. The recognition also demonstrates the port’s continuous progress in accordance with its long-term strategic plans and objectives, embodying the motto ‘Sailing Toward the Vision’ launched during its official inauguration in 2019, which was attended by HRH Prince Mohammed bin Salman, Crown Prince, Deputy Prime Minister and Minister of Defense of the Kingdom of Saudi Arabia.

The new ranking also comes as a testimony to its contribution to the objectives of Vision 2030 and the National Transport and Logistics Strategy to raise the efficiency of Saudi Arabia’s logistics sector, transform the Kingdom into a leading global trade hub, and diversify its economy.

King Abdullah Port has been actively contributing to the Kingdom’s ambition for a diversified economy that relies on the non-oil sector, of which logistics is a focus area, through its highly efficient business plan based on a public-private partnership (PPP) model, complemented by the efforts of Mawani. The unique PPP model consists of a partnership with over 17 government agencies, under the supervision of the Economic Cities and Special Zones Authority, while retaining full management and operation control by the private sector. Recently, the port reached 15 million TEU in container throughput, a stellar achievement in under nine years since the launch of the container terminal.

Owned by the Ports Development Company, King Abdullah Port is the region’s first port to be owned, developed, and operated by the private sector. The port emerged as one of the world’s top 100 ports within four years of operation. With its strategic location in King Abdullah Economic City – a modern city with a pro-business ecosystem and infrastructure – King Abdullah Port leverages the city’s advanced facilities and services, particularly the Industrial Valley, which has attracted many logistics projects as well as light and medium industries.
####
About King Abdullah Port
Strategically located on the Red Sea coast in King Abdullah Economic City, King Abdullah Port, ranked by The World Bank as the world’s most efficient port in 2021, is the Middle East’s first privately owned, developed and operated port. Occupying an area of 17.4 km2, and enjoying close proximity to the key Saudi cities of Jeddah, Holy Makkah, Al Madinah and Yanbu, as well as its direct access to extensive transportation networks that facilitates the cargo transport through the kingdom and the rest of the region, the port is making an increasingly important contribution to the Kingdom’s global role in maritime trade and logistics. Once fully completed, King Abdullah Port will be capable of handling 25 million TEU, 1.5 million CEU and 25 million tons of clean bulk cargo annually. 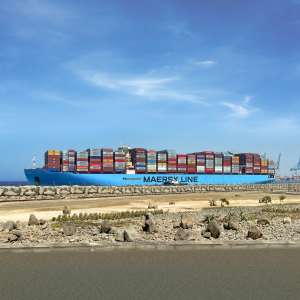 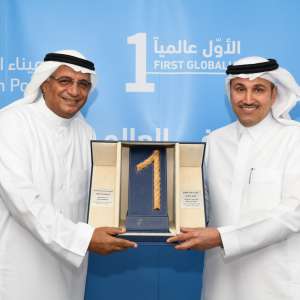