King Abdullah Economic City, August 2, 2022: King Abdullah Port has announced the details of its improved performance regarding the container shipping operations during the first half of 2022. Throughout the six-month period between January and June, the port handled a total of 1,502,720 twenty-foot equivalent units (TEU), an increase of 6.69 per cent compared to the same period last year.

The announcement of the most recent container transshipment figures in H1 2022 indicated an upward trend of growth for King Abdullah Port, which operates within King Abdullah Economic City (KAEC). In May of this year, the port reached a milestone of handling 15 million TEU in a record amount of time since container terminal operations started nine years ago. The port’s most recent increase in H1 2022 follows a 31 per cent rise in container import and export during 2021.

Commenting on the figures, Jay New, Chief Executive Officer of King Abdullah Port, stated: “We are proud of King Abdullah Port’s performance during the first half of 2022 and look forward to continuing our role to position Saudi Arabia as a leader in the global logistics market. Amidst constantly evolving demands, we firmly believe in our capabilities and processes which allow us to overcome a variety of conditional industrial shifts, both projected and unforeseen. Thanks to the tremendous contributions from our port’s team and the pioneering leadership of the Kingdom, we continue our journey towards logistical excellence in alignment with the objectives of Vision 2030.”

In 2021, the port was awarded the title of the most efficient port globally according to a global index developed by The World Bank and S&P Global Intelligence, demonstrating the port’s commitment to the continual improvement of its services. The achievement was received by King Abdullah Port despite the global pandemic’s impact on maritime traffic, which caused high freight rates and inconsistent trade patterns worldwide. Featuring superior infrastructure and 18-meter-deep berths, King Abdullah Port remains a key strategic facility to enable the Kingdom of Saudi Arabia’s ambitions of becoming a leading provider of logistics internationally.

Owned by the Ports Development Company, King Abdullah Port is the region’s first port to be owned, developed, and operated by the private sector. The port emerged as one of the world’s top 100 ports within four years of operation. With its strategic location in KAEC – a modern city with a pro-business ecosystem and infrastructure – King Abdullah Port leverages the city’s advanced facilities and services, particularly the Industrial Valley, which has attracted many logistics projects as well as light and medium industries.
####
About King Abdullah Port
Strategically located on the coast of the Red Sea in King Abdullah Economic City (KAEC), King Abdullah Port is the Middle East’s first privately owned, developed and operated port. The award-winning port effectively utilizes its proximity to the key Saudi cities of Jeddah, Holy Makkah, Al Madinah and Yanbu, to offer direct entry to an extensive local transportation network that includes other major cities and neighboring countries, while also facilitating the distribution of goods into key international hubs through uninterrupted access to primary shipping routes.

Occupying an area of 17.4 square kilometers, King Abdullah Port has made vital contributions to the Kingdom’s global role in maritime trade and logistics. With its position along the main East-West shipping route between Europe, Asia and Africa, which accounts for more than 13 % of all global trade, the world-class port is equipped with state-of-the-art infrastructure readily capable of receiving today and tomorrow’s mega cargo ships.

This year, King Abdullah Port cemented its standing as a leading container port globally, being ranked first among the most efficient container ports in the world on the 2021 Container Port Performance Index (CPPI) report published by The World Bank and S&P Global Market Intelligence. 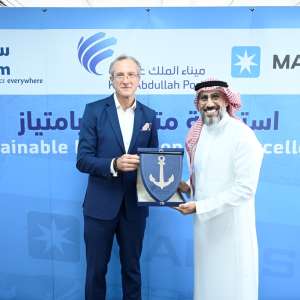