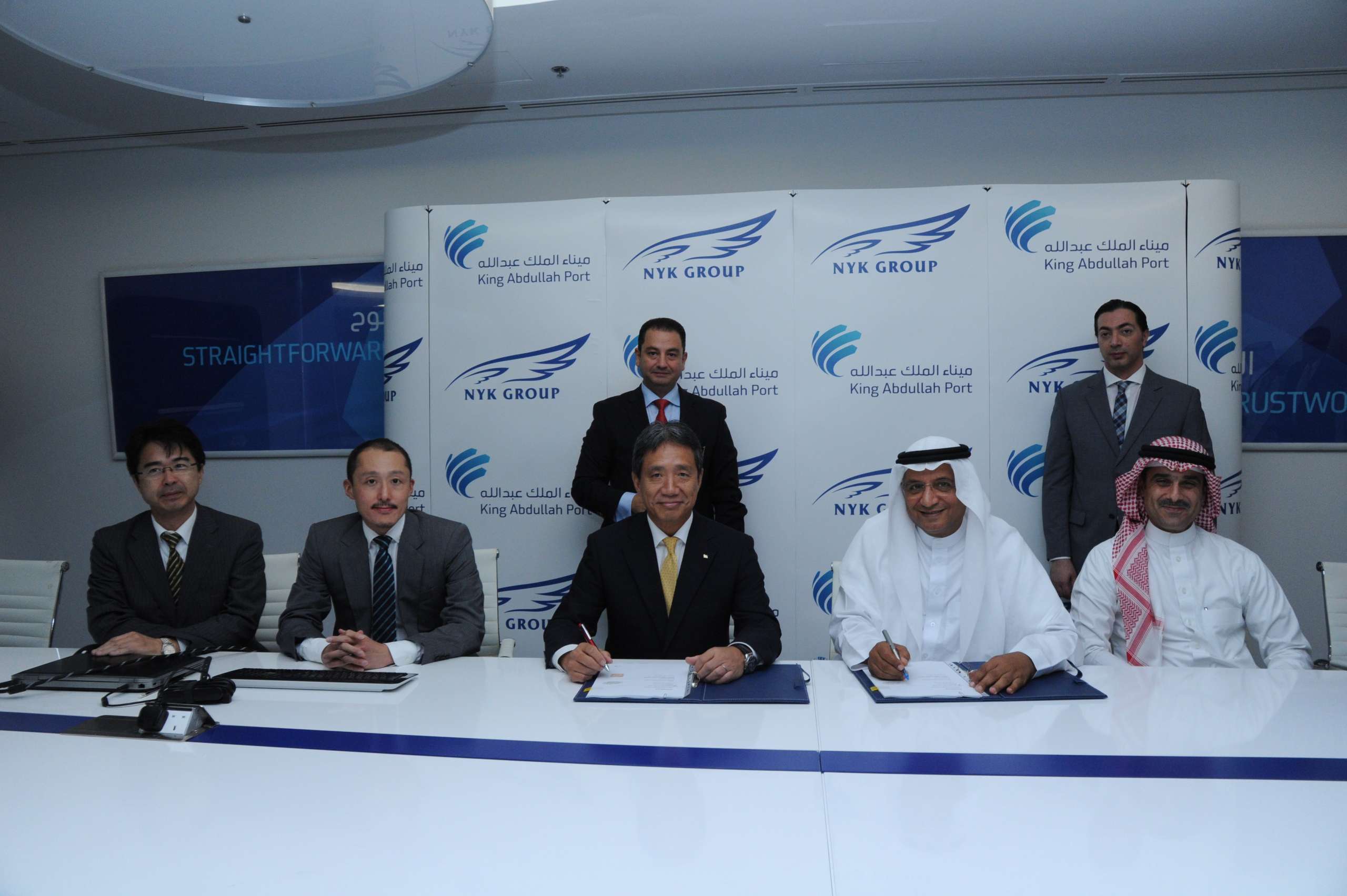 After signing the agreement, the delegates went on a tour to King Abdullah Port to see the infrastructure development of the Ro-Ro terminal and the technologically advanced features and equipment that makes King Abdullah Port one of the most advanced and modern ports in the region.

Commenting on the joint venture, Mr. Saleh Bin Laden (PDC Chairman), said: “We are delighted to be partnering with NYK Group for operation of the first Ro-Ro terminal at King Abdullah Port. It is worth mentioning that this is the first terminal in the region to be co-managed and operated by NYK and having this trust in us by the industry leader is something that we take pride in. King Abdullah Port Ro-Ro Terminal will significantly diversify the services offered by King Abdullah Port, extending them beyond containerized goods, and will be an integral part of the facilities and services offered in addition to containers and bulk and general cargo. NYK Group’s pioneering operational experience will
ensure King Abdullah Port becomes one of the best Ro-Ro services destinations in the region.”

Mr. Saleh Bin Laden went on to express his appreciation of the Economic Cities Authority and all the governmental agencies at the port for their exceptional support for the developmental work at King Abdullah Port and their contribution to achieving the port’s strategic objectives and enhancing its role in advancing the economic development of the Kingdom of Saudi Arabia

Adding his comments, Koichi Chikaraishi, Representative Director and Chief Executive of Automotive Transportation said: “At NYK Group we are thrilled at being part of this joint venture at King Abdullah Port where we look forward to offering the expertise and the creative solutions initiated in the group’s “More Than Shipping 2018” medium-term management plan to provide advanced Automotive Logistics Services in order to facilitate operation of the Ro-Ro terminal to accommodate customers’ needs and expectations and to contribute to maximize the potential for the expected increase in volume of vehicle units in line with the continuing prosperity of Saudi Arabia.”

The automotive sector at KAEC is comprised of leading local and international players such as Abdul Latif Jameel (ALJ), Naghi Group, Juffali Automotive Company, and Al Zahid Group, which earlier in June 2015 celebrated the production of the first Volvo truck from its assembly line in KAEC.

King Abdullah Port, owned and developed by the Ports Development Company at King Abdullah Economic City, is the first port being fully developed by the private sector. The port is characterized by its strategic geographical location, fully integrated services and through the practice of deploying the most advanced technologies and employing local and international experts to provide the best services.

The Ports Development Company is a joint venture between Emaar, the Economic City (EEC), the master developer of KAEC, and Huta Marine Works Ltd.